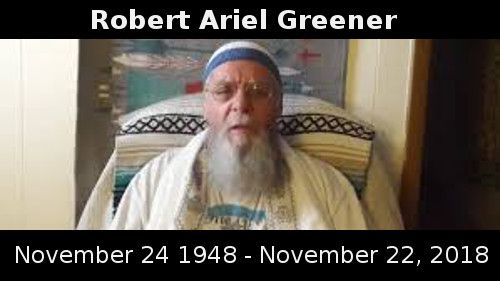 On Thursday, November 22, 2018, Robert Douglas Greener, husband and father of three children, passed away at the age of 69.

On November 24th, 1948 Robert was born in Halifax, Nova Scotia, Canada to the late John Stanley Greener and the late Estelle Greener (Stone). He worked for nearly 30 years in the pharmaceutical industry before moving to the United States. He settled in Albuquerque, New Mexico, finding comfort and many friends in the Jewish community. In 2005, he founded Committed Torah Counseling, a faith-based counseling ministry. It is also in Albuquerque that he met his wife, Irene. They bonded over the Jewish faith and their love of reading and were married in 2011.

Robert had a passion for reading and knowledge, especially as it related to religious texts and information. He also loved to socialize with members of the community and to help even strangers understand the power and his love of Yahweh.  Many knew him for his smile and his spirit, and some knew him for his great driving skills.